Flipping through reference books while looking for examples of goldwork embroidery, I stumbled onto a page in Flowers, Dragons, & Pine Trees that made me pause, somewhat concerned, and turn the book upside-down. The image, plate 77 on page 234, is credited as an indigo dyed Kasuri Futonji from the 19th or 20th century. From the text, the design is identified as that of an octopus, probably originating from a workshop on the San’in coast. Click on the images below for a closer look.

The origin location makes it sound like an octopus is quite likely for this design. The main shape is round, and it has tentacle looking appendages.  But it isn’t an octopus. This is an octopus. A very clever, tsutsugaki-rendered octopus (currently hiding in storage at the Victoria and Albert Museum). 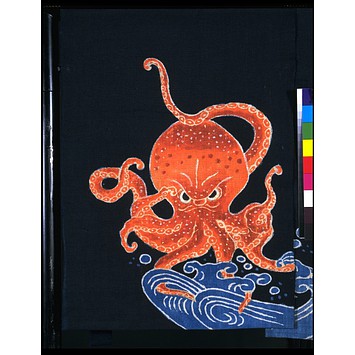 The image presented in plate 77 is (in my humble opinion) a houju (宝珠), or Buddhist sacred jewel. From JAANUS:

Also nousashou houju 能作性宝珠, mani houju 摩尼宝珠. A sacred jewel, said to remove suffering, and capable of granting every wish. Usually has a round base and pointed top, sometimes surrounded by flames. According to legend the nyoi houju is said to have emerged from the head of the dragon king ryuuou 竜王, or to be made out of eleven precious materials, including Buddha’s ashes, gold, silver and various aromatic woods. Found as an attribute *jimotsu 持物, held by Buddhist deities such as *Nyoirin Kannon 如意輪観音, *Jizou 地蔵, and *Kichijouten 吉祥天. A good example is the mid-9c Nyoirin Kannon in Kanshinji 観心寺, Osaka.

The sleeve shown here is part of a larger country-made textile. This men’s cotton kimono, dyed in indigo and decorated in the tsutsugaki technique with what were once more vivid colors, would have been worn during festivals or other times of celebration.

And that upside-down page? Here’s how it looks (as I believe to be) the right way.

Aside from my disagreement with the author’s photo identification, I would highly recommend Flowers, Dragons, & Pine Trees; Asian Textiles in the Spencer Museum of Art by Mary M. Dusenbury for your reference library. It is image-dense, research-heavy, and covers several countries and regions of what we collectively refer to as Asia. Your local library may have a copy. If not, ask at the reference desk, visit your local bookseller, or check it out on Amazon.