My brain is still on Tokyo time. I sit at the breakfast table with my tea and toast and contemplate the day ahead; only it’s almost noon and I’m still not really awake. Most nights I’m up until 1:00 or 2:00 AM, but I’m struggling to get back on a schedule the rest of the household can live with. Even the dogs want me to get to bed before midnight so I can feed them breakfast at a decent hour.

We learned so much on our Silk Study Tour in Japan. Ten days packed with information, travel, shopping, eating amazing food, and learning. I think my head is still recovering from all the new ideas I have to process. Going through my notes and photos I find there is so much to share with you, and so it begins.

Part 1 of the journey begins in on a sericulture farm in the outskirts of Tokyo, where we meet master sericulturist Koyota Okonogi and his wife. Along with a team of volunteer assistants and his English-speaking apprentice Noriko, the 90-year-old Koyota san showed us the stages of silkworm life from egg to caterpillar and pupa to cocoon.

There are hundreds of types of silkworm, and Koyota san chooses to use the very best he can find. The variety he uses on his farm is a type more commonly used in the Edo era, and rare in today’s sericulture market. Today’s more readily available silkworm stock is often hybridized to produce stronger silk or larger cocoons, but this older variety produces a fine thread with a beautiful sheen.

Conditions for the silkworms are kept as stable as possible. Once the eggs hatch, the caterpillars are kept on woven trays in a small, dry, heated room where they are fed layers of fresh mulberry leaves. They eat and defecate as they grow larger, and the trays are switched out regularly to remove the fecal matter they leave behind. At all times the silkworms are encouraged to grow fat and happy. They do appear very content. The white powder is lime, used to keep the leaves dry and to discourage mold which might kill the young caterpillars.

The silkworms mill about, eating and growing larger, until it is time for them to sleep. The sleeping stage is evident when a caterpillar stands with his head aloft, gently swaying a little back and forth. This indicates the cocoon stage is next, and racks are put out for the silkworms to crawl into and make their soft little homes. Unfortunately I didn’t get a photo of those as they were not being used at the time we visited. The frames are made of wood, about a meter wide and maybe a bit longer, about two inches deep, and are an open, framed grid. the worms spin their cocoons, one to each square in the grid, and sleep again. Once the cocoons are harvested, the pupae inside must be killed or they will burst out of the cocoons, which spoils the thread so that it cannot be used for fine spinning. Some sericulturists steam the cocoons, others kiln-heat them. 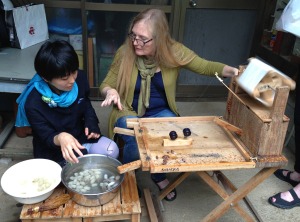 Here Noriko san is assisting ShiboriGirl as she reels out silk from several cocoons at a time. The cocoons were put in boiling water for several minutes to soften the fibers, then a bundle of stiff rushes is brushed on each one to loosen a thread that can be used to begin reeling the cocoon out. Using this method, one person can reel up to 20 cocoons at a time, switching out the spent cocoons with the right hand while continuously reeling with the left. To stop reeling is to risk breaking the fine thread, and the work can be quite exhausting after a while. 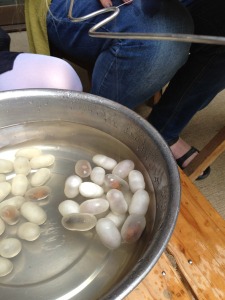 The silk filature is so fine it is almost invisible, until layers of it on a spool stand out as a testament to the spinner’s effort and endurance. I took the photo below with my right hand while turning the handle with my left. Some of the assistants found it amusing that I was juggling my camera in such a way, but I had been told not to stop spinning and I didn’t want to miss the shot!

The small arm with a wire loop moves back and forth to keep the thread spinning evenly onto the square wooden spool. The thread is a naturally beautiful, creamy white. 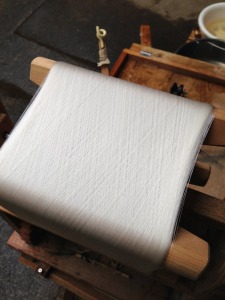 Another way to use the cocoons is to make mawata, layers of unrefined silk fiber. Boiled and softened cocoons are spread apart and stretched onto a wooden frame, layer by layer. Once dry, these layers make a single sheet of soft silk that weighs very little but has a great deal of tensile strength. It can be used as an effective bandage, as silk has many healing properties, or it may be stretched again to produce a thermal lining for a garment, or batting for a quilt. 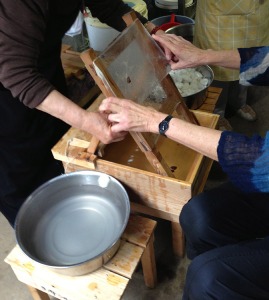 As the mawata is stretched, one or more pupae (visible as a brown spot in the photo above) must be removed. In the first coccon I stretched the pupae inside had spoiled, leaving behind a nasty, gritty mess. I held it out to an assistant, who wordlessly demonstrated for me to scoop the muck out and keep going. I did, and found the next few cocoons I opened were fairly clean. Layer upon layer may be added until the frame goes from transparent to opaque.

When dry these handkerchief-sized mawata still retain their stretchability, and many of them may be expanded and layered to produce a comfortable quilt. It takes two pairs of hands to pull each mawata to the right dimensions, over and over again. 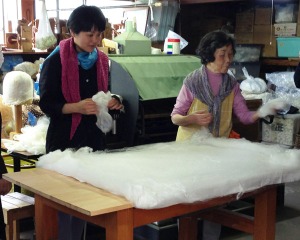 Apprentice Noriko san and Koyota’s wife add to the fluffy layers. Many of us started yawning at this point, as watching soft clouds of silk floating down onto the table was quite soporific. [I’ve always wanted to use that word in a story! It means sleep-inducing.]

Orange thread was used to tack the batting in place once the mawata was folded inside a cotton shell. 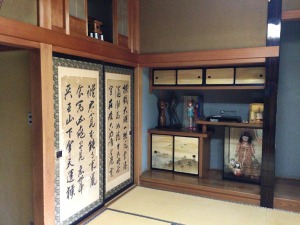 Koyota san’s hospitality extended not only to his farm and workshop, but into his home. Newly built in a traditional style by highly skilled carpenters, it shows the best of Japanese construction and refinement. Antique touches mix and mingle with modern accents. 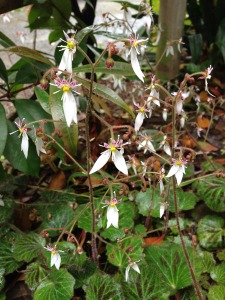 Even the garden held a few surprises. I found this little saxifrage (“Yukinoshita”) hiding alongside a fence near the workshop. If only I could have brought it home!

Leave a Reply to The Ardent Thread Cancel reply