I’ve been selling sashiko thread in my shop since 2008, and it’s always been Olympus thread, nothing else. I knew of other brands, but Olympus has been a dependable brand for me, and I’ve been very happy to have it in stock and use it in my classes and projects.

Earlier this year discovered Hida Sashiko thread and I am hooked. The depth and variety of colors is quite impressive and the quality of the thread is very high. However, due to an agreement I’ve made with the company, I cannot sell the thread in my online shop. I can, however, sell it at shows and in my classes and workshops–anytime I’m face-to-face with my customers, as the company has requested. Hida Sashiko is a company of sashiko professionals who are passionate about their traditional craft, and they would prefer to limit online access to their products for the time being.

Perhaps not the greatest photo, but it does show how much of a difference there is between the more familiar Olympus off-white 100m skein, Olympus bright white 40m skein, and everything in between. Hida #10 is an unbleached cotton, my favorite color to use with deep indigo and especially the antique indigo katazome cottons that will be appearing soon in the shop. Hida #11 is a buttery white, clean but with mild yellow tones. Hida #12 is a crisp, bright white, but not as visually flat as the Olympus bright white 40m skein.

Another difference I’m sure you’ve noticed is the size of the skeins. Olympus comes in 40 meter and 100 meter skiens, and Hida comes in 50 meter (not shown) and 145 meter skeins. I find that when starting out with sashiko it’s nice to have an inexpensive, smaller skein to start with, so many of my customers go with Olympus until they get a feel for sashiko. Once they’re feeling more comfortable with the size of the needle and thread, they move up to the Hida. There is a cost difference, which is to be expected as Hida is a higher quality product manufactured on a smaller scale than Olympus, but it is worth it. The Olympus 100m skien on the far left currently retails for US$7 in my shop, and the Hida 145m skeins in solid colors retail for US$13.50.

One of my best-selling Olympus colors has always been a light spring green. Hida has a similar shade of green, plus many more. While Olympus offers two solid shades of green, Hida has seven. 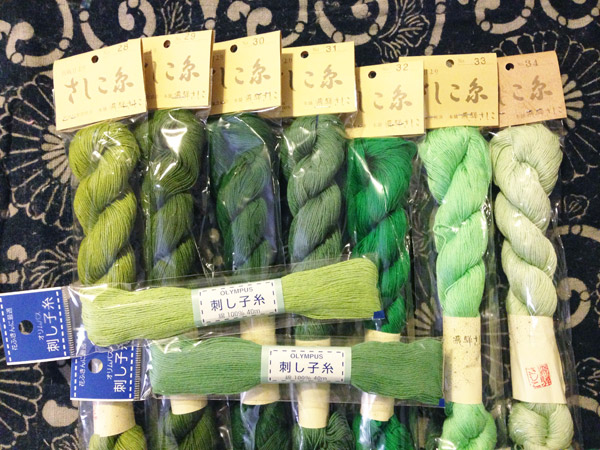 I stock all 50+ colors of Hida thread including variegated thread and a limited number of botanically-dyed threads. I have them available at all open studio days, East Bay Sashiko Workshop Meetups, live shows, and classes. If you are already familiar with Hida thread and need to stock up, contact me directly to set up an order. I will be posting a list of upcoming shows very soon, including AQS Quilt Week in Phoenix, Arizona in February, 2014.