After handling these fabrics for several years, I often forget that many people have never seen a bolt (called a tan) of Japanese fabric, much less a kimono. Here are my thoughts on a question I am often asked:

Why is the fabric so narrow?

This is a bit of a chicken-and-egg question, as I’m not sure which answer came first. Were the fabrics originally woven so narrow because that’s how big the Japanese looms were, or were the looms made that way to best accommodate kimono design?

The narrow back strap loom historically used in many cultures around the world is portable, easy to use and simple to build. A woman could weave through the otherwise unproductive winter months and have fabric ready to sew into new clothes for her family in the spring.

A 12 meter long tan will make a single kimono or yukata with no leftover fabric. The basic kimono garment design is four panels wide, each panel being around 14″ (36 cm) wide. A sleeve is a single panel folded in half, and the front and back panels reach from front hem to back hem with no seam in the shoulder to separate them. This lack of a break is why you’ll often see fabrics with designs that face both up and down on the bolt. 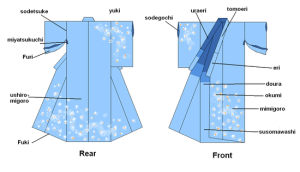 Note that there are no actual curves on a kimono. Anything that appears curved is an illusion, basted, stitched or tucked into being. All cuts are straight. This facilitates reuse as when a single part of the garment becomes worn or stained, it may simply be relocated. Worn cuffs on sleeves may be swapped so that the worn part is now hidden under the arm and the part previously under the arm is now the cuff. This is similar to turning the collar on an old dress shirt, as my mother used to do.

What makes modern yukata fabrics so interesting to me is not how they are woven, but how they are dyed. The fabrics are folded in meter-lengths after being treated with a resist to reserve images. A table vacuum sucks dye through several layers at a time to produce these beautiful mirror effects where one meter ends and another begins. 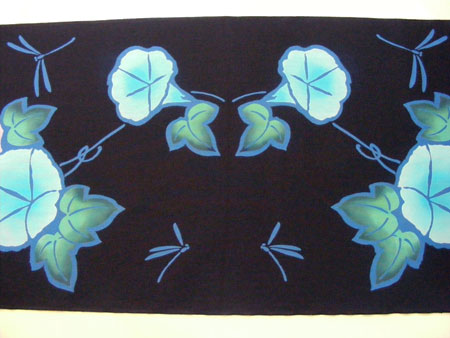 … or in this case, “butterfly effect”. 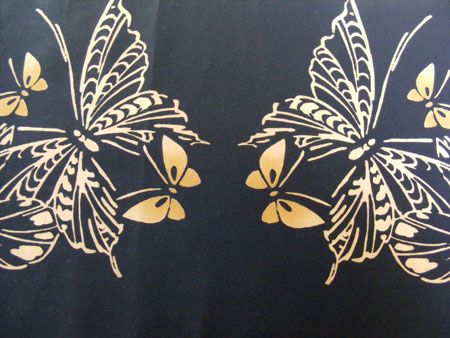 The morning glory fabric above has been mass-produced in the deep, dark synthetic indigo so often seen on casual summer yukata. The butterfly fabric, however, appears to have been carefully hand dyed with indigo over a beige fabric which almost looks as if it has been tea-dyed. I’m guessing that a rice paste resist was applied with a stencil or block to create the delicate butterflies.  The darker wings of the small butterflies were added in as a final touch. 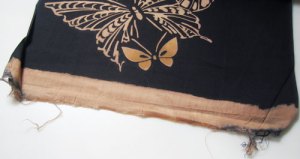 I love the little details that show the touch of an artist’s hand. 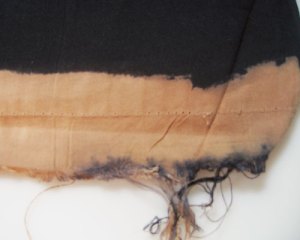