I didn’t name him. Thomas did. And yes, I think of the tansu in the corner as male, unlike my sewing machines, which are always female. So far as Thomas is concerned, according to Shel Silverstein and Jonny Cash, Sue can be a boy, too.

After looking at tansu in antique shops for years but moving too frequently (and being too poor) to justify owning one, I sort of fell for this one in a way that I shouldn’t have. Yes, he’s strong and attractive, practical and slim, but… oh, let’s just leave it at that. Practical and handsome does it all for me.

I’ve been trying to date and/or locate his area of origin, but to no avail so far. Thomas, having far more carpentry skills than I have, noticed several indications that Sue is probably not as old as I had assumed. I could tell that this tansu wasn’t all that old or special, but I at least figured he was early 20th century. Thomas looked at the construction and hardware, and estimated Sue to be from the 1960s. “It’s still a nice piece,” Thomas said consolingly as I frowned at Sue. It could be worse. Judging by some of the scribbled markings on the wood inside (possibly reclaimed wood so as to look more antique), he at least appears Japanese and not from a Chinese workshop. 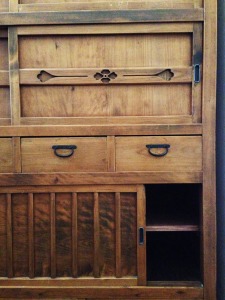 The people I bought it from knew nothing of his history, condition, or much else, but they were willing to work with me on the price so I didn’t mind. I believe Sue is a mizuya, or kitchen tansu. These often have screened sliding doors on them, but Sue doesn’t. His construction is solid wood all around. The exterior varnish feels like beeswax, which it likely is. I suspect a little shoe polish was added to darken some areas. Ah, tricks of the antique trade.

The drawer pulls are beautiful. They are hand-forged iron, delightfully rustic, and likely authentic. Inside the drawer, however, one can see flat round nails, terribly modern. The joinery isn’t fancy, but it is sturdy. At least now I know to check for such things in the future. 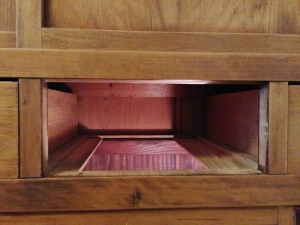 The exterior finish is light and fairly plain. Inside it has been antiqued to look old and dark, but the job wasn’t very well done, which makes the antiquing even more obvious. Shelves were added at some point, which definitely aren’t original or even done very well. They are functional and removable, which isn’t so bad.

What sold me on this tansu was how beautifully the doors slide. I’ve seen several tansu in Japanese antique shops here in the San Francisco area that had sticky, rough-sliding doors, which simply won’t do.

Right now I’m not sure whether I want to keep Sue for the long-term or not. I think that as far as starter tansu go, he’s a good one, but I’d like to move up to something else in the future. For now he’s holding down the corner and keeping my secrets within his seemingly modest depths–there is far more storage space available here than at first appears!

Do you have any antique-hunting stories or advice to share? I’d love to hear it!